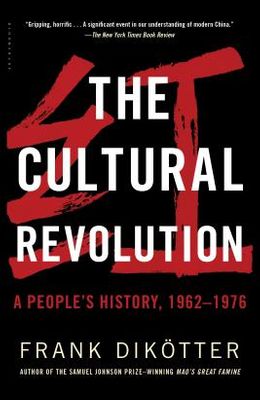 The concluding volume--following Mao's Great Famine and The Tragedy of Liberation-- in Frank Dikotter's award-winning trilogy chronicling the Communist revolution in China. After the economic disaster of the Great Leap Forward that claimed tens of millions of lives from 1958-1962, an aging Mao Zedong launched an ambitious scheme to shore up his reputation and eliminate those he viewed as a threat to his legacy. The Cultural Revolution's goal was to purge the country of bourgeois, capitalistic elements he claimed were threatening genuine communist ideology. Young students formed the Red Guards, vowing to defend the Chairman to the death, but soon rival factions started fighting each other in the streets with semiautomatic weapons in the name of revolutionary purity. As the country descended into chaos, the military intervened, turning China into a garrison state marked by bloody purges that crushed as many as one in fifty people. The Cultural Revolution: A People's History, 1962-1976 draws for the first time on hundreds of previously classified party documents, from secret police reports to unexpurgated versions of leadership speeches. After the army itself fell victim to the Cultural Revolution, ordinary people used the political chaos to resurrect the market and hollow out the party's ideology. By showing how economic reform from below was an unintended consequence of a decade of violent purges and entrenched fear, The Cultural Revolution casts China's most tumultuous era in a wholly new light.