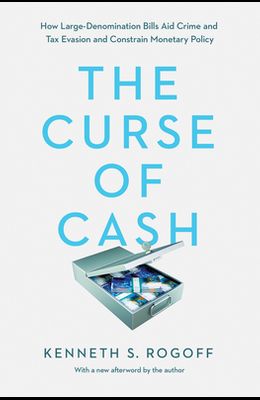 The Curse of Cash: How Large-Denomination Bills Aid Crime and Tax Evasion and Constrain Monetary Policy

From the New York Times bestselling author of This Time Is Different , a fascinating and important book (Ben Bernanke) about the surprising reasons why paper money lies at the heart of many of the world's most difficult problems The world is drowning in cash--and it's making us poorer and less safe. In The Curse of Cash , acclaimed economist Kenneth Rogoff explores the past, present, and future of currency, from ancient China to today's cryptocurrencies, showing why, contrary to conventional economic wisdom, paper money surprisingly lies at the heart of some of the world's most difficult problems. Cash is becoming increasingly marginalized in the legal economy, but there is a record amount of it in circulation--$1.4 trillion in U.S. dollars alone, or $4,200 for every American, mostly in $100 bills--and most of it is used to finance tax evasion, corruption, terrorism, the drug trade, human trafficking, and the rest of a massive global underground economy. Paper money also cripples monetary policy by making it impossible for central banks to lower interest rates significantly below zero, and The Curse of Cash explains why countries must establish effective negative interest rate policies to manage the next financial crisis. Even if governments take better control of paper currency, perhaps by phasing out large-denomination notes, cryptocurrencies raise old and new issues. Looking to the future of public and private digital currency, The Curse of Cash cites the lesson of history: when it comes to currency, the private sector may innovate but eventually the government regulates and appropriates. Provocative, engaging, and backed by compelling original arguments and evidence, The Curse of Cash is certain to spark widespread debate.

From the Back Cover A fascinating and important book. Kenneth Rogoff sets out a compelling and wide-ranging argument for weaning our economies off paper money. --Ben S. Bernanke, former chairman of the U.S. Federal Reserve Highly engaging, thought-provoking, and persuasive, The Curse of Cash makes the case that time is running out for paper money. As Kenneth Rogoff has done before, this book sets the standard on a problem that will only become more important; it is also sure to influence discussions about the ability of central banks to deliver growth and financial stability. This is a must-read. --Mohamed El-Erian, author of The Only Game in Town: Central Banks, Instability, and Avoiding the Next Collapse Should we become a largely cashless society? Kenneth Rogoff makes a strong case that we should in this wide-ranging book, which touches on history, crime, technology, and monetary policy. Clearly and persuasively argued, this is a must-read. --Linda Yueh, author of China's Growth: The Making of an Economic Superpower In this fascinating and important book, Kenneth Rogoff argues forcefully that advanced economies should phase out cash because it facilitates crime and constrains policy. With a wealth of data and clear explanations, the book demystifies central banking and negative interest rates, thus elevating the discussion of both. --Anat R. Admati, coauthor of The Bankers' New Clothes: What's Wrong with Banking and What to Do about It Most people like cash. Not Kenneth Rogoff--for reasons ranging from its benefits to organized crime to the way it impedes antirecessionary monetary policy. He's written a tour de force explaining why. Reading it will make you both smile and think. --Alan S. Blinder, author of After the Music Stopped: The Financial Crisis, the Response, and the Work Ahead Ken Rogoff led the way in stressing the now widely accepted public policy benefits of eliminating large-denomination currency. His new book provides cogent arguments for an even bolder step: eliminating cash altogether. The proposal could not be more timely, and his arguments deserve consideration by policymakers and the general public alike. --Michael Woodford, Columbia University The Curse of Cash is brilliant and insightful. In addition to giving a vivid picture of the cash-crime nexus, The Curse of Cash is the book everyone should read about negative interest rates. --Miles Kimball, University of Michigan Original and fascinating, The Curse of Cash makes a totally convincing argument that advanced economies have many good reasons for phasing out paper currency as soon as possible. More clearly and with more evidence than anyone before, Kenneth Rogoff makes the case that cash feeds illegal behavior--and that illegal behavior probably now accounts for the majority of cash in circulation. Raising challenging questions, this book will be of wide interest. --John Kay, author of Other People's Money: The Real Business of Finance