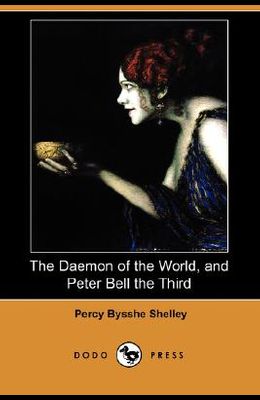 The Daemon of the World, and Peter Bell the Third (Dodo Press)

Percy Bysshe Shelley (1792-1822) was one of the major English Romantic poets and is widely considered to be among the finest lyric poets of the English language. He received his early education at home, tutored by Reverend Evan Edwards of Warnham. In 1802, he entered the Syon House Academy of Brentford. He was routinely bullied while he was there, both because of his girlish appearance and his family's aristocratic ties. Shelley's unconventional life and uncompromising idealism, combined with his strong skeptical voice, made him a notorious and much denigrated figure during his life. Distracted by political events, he visited Ireland in order to engage in radical pamphleteering where he wrote the Address to the Irish People. His activities earned him the unfavourable attention of the British government. His first publication was a Gothic novel, Zastrozzi (1810). He is most famous for such anthology pieces as Ozymandias, Ode to the West Wind (1819) and To a Skylark (1820). His major works were long visionary poems including Alastor (1815), The Revolt of Islam (1817) and Adonais (1821).