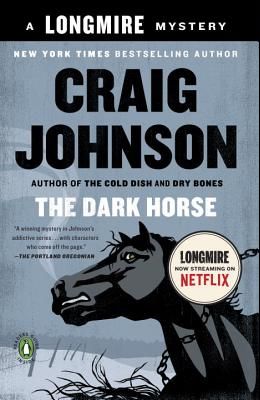 The Dark Horse: A Longmire Mystery

Book #5 in the Walt Longmire Series
by
Craig Johnson

It's the scenery-and the big guy standing in front of the scenery- that keeps us coming back to Craig Johnson's lean and leathery mysteries. -Marilyn Stasio, The New York Times With its stellar hardcover reviews-including stars in all four trade publications-and its riveting plot, Sheriff Walt Longmire's fifth and latest outing is sure to be the most successful installment in a series that has been garnering more praise and many more loyal fans with each new book. Wade Barsad, a man with a dubious past and a gift for making enemies, burned his wife Mary's horses in their barn; in retribution, she shot him in the head six times. But Longmire doesn't believe Mary's confession. Leaving behind the demands of his upcoming re-election campaign, Walt unpins his star to go undercover and discovers that everyone-including a beautiful Guatemalan bartender and a rancher with a taste for liquor-had a reason for wanting Wade dead.