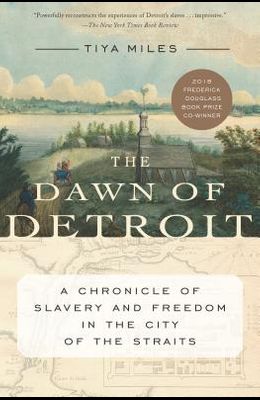 The Dawn of Detroit: A Chronicle of Slavery and Freedom in the City of the Straits

2018 Frederick Douglass Book Prize Co-Winner 2018 John Hope Franklin Prize Finalist 2018 Zora Neale Hurston/Richard Wright Legacy Award (Nonfiction) Winner 2018 American Book Award Winner 2018 Harriet Tubman Prize Finalist Longlisted for the 2018 Cundill History Prize 2018 Merle Curti Social History Award Winner 2018 James A. Rawley Prize Co-Winner A New York Times Editor's Choice selection A Michigan Notable Book of 2018 A Booklist Editors' Choice Title for 2017 If many Americans imagine slavery essentially as a system in which black men toiled on cotton plantations, Miles upends that stereotype several times over. -- New York Times Book Review Miles] has compiled documentation that does for Detroit what the Works Progress Administration and the Federal Writers' Project slave narratives did for other regions, primarily the South. -- Washington Post Tiya Miles] is among the best when it comes to blending artful storytelling with an unwavering sense of social justice. -- Martha S. Jones in The Chronicle of Higher Education A necessary work of powerful, probing scholarship. -- Publisher Weekly (starred) A book likely to stand at the head of further research into the problem of Native and African-American slavery in the north country. -- Kirkus Reviews The prizewinning, nationally celebrated account of the slave origins of a major northern city A brilliant paradigm-shifting book that transports the reader back to the eighteenth century and brings to life a multiracial community that began in slavery ( The New York Times ), The Dawn of Detroit reveals for the first time that slavery was at the heart of the Midwest's iconic city. Hailed by Publishers Weekly in a starred review as a necessary work of powerful, probing scholarship, The Dawn of Detroit meticulously uncovers the experience of the unfree--both native and African American--in a place wildly remote yet at the center of national and international conflict. Tiya Miles has skillfully assembled fragments of a distant historical record, introducing new historical figures and unearthing struggles that remained hidden from view until now. In her eloquent account, the Washington Post declared, Miles conjures up a city of stark disparity and lives quashed. A message from the past for our troubled present, The Dawn of Detroit is an outstanding contribution that seeks to integrate the entirety of U.S. history, admirable and ugly, to offer a more holistic understanding of the country ( Booklist , starred review).