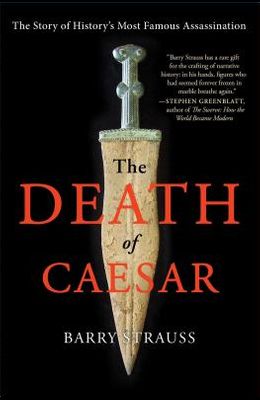 The Death of Caesar: The Story of History's Most Famous Assassination

In this story of the most famous assassination in history, the last bloody day of the Roman] Republic has never been painted so brilliantly ( The Wall Street Journal ). Julius Caesar was stabbed to death in the Roman Senate on March 15, 44 BC--the Ides of March according to the Roman calendar. He was, says author Barry Strauss, the last casualty of one civil war and the first casualty of the next civil war, which would end the Roman Republic and inaugurate the Roman Empire. The Death of Caesar provides a fresh look at a well-trodden event, with superb storytelling sure to inspire awe ( The Philadelphia Inquirer ). Why was Caesar killed? For political reasons, mainly. The conspirators wanted to return Rome to the days when the Senate ruled, but Caesar hoped to pass along his new powers to his family, especially Octavian. The principal plotters were Brutus, Cassius (both former allies of Pompey), and Decimus. The last was a leading general and close friend of Caesar's who felt betrayed by the great man: He was the mole in Caesar's camp. But after the assassination everything went wrong. The killers left the body in the Senate and Caesar's allies held a public funeral. Mark Antony made a brilliant speech--not Friends, Romans, Countrymen as Shakespeare had it, but something inflammatory that caused a riot. The conspirators fled Rome. Brutus and Cassius raised an army in Greece but Antony and Octavian defeated them. An original, new perspective on an event that seems well known, The Death of Caesar is one of the most riveting hour-by-hour accounts of Caesar's final day I have read....An absolutely marvelous read ( The Times , London).