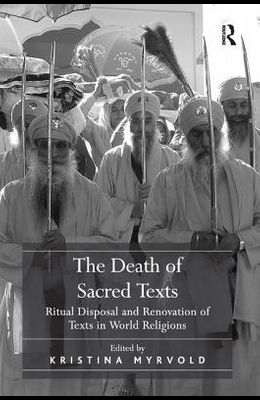 The Death of Sacred Texts: Ritual Disposal and Renovation of Texts in World Religions

The Death of Sacred Texts draws attention to a much neglected topic in the study of sacred texts: the religious and ritual attitudes towards texts which have become old and damaged and can no longer be used for reading practices or in religious worship. This book approaches religious texts and scriptures by focusing on their physical properties and the dynamic interactions of devices and habits that lie beneath and within a given text. In the last decades a growing body of research studies has directed attention to the multiple uses and ways people encounter written texts and how they make them alive, even as social actors, in different times and cultures. Considering religious people seem to have all the motives for giving their sacred texts a respectful symbolic treatment, scholars have paid surprisingly little attention to the ritual procedures of disposing and renovating old texts. This book fills this gap, providing empirical data and theoretical analyses of historical and contemporary religious attitudes towards, and practices of text disposals within, seven world religions: Judaism, Islam, Christianity, Hinduism, Buddhism, Jainism and Sikhism. Exploring the cultural and historical variations of rituals for religious scriptures and texts (such as burials, cremations and immersion into rivers) and the underlying beliefs within the religious traditions, this book investigates how these religious practices and stances respond to modernization and globalization processes when new technologies have made it possible to mass-produce and publish religious texts on the Internet.