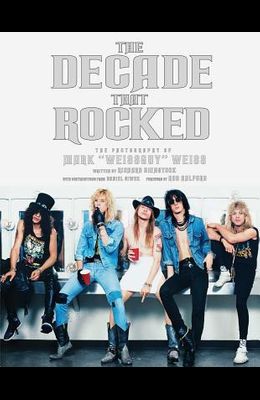 Mark is the real deal. He may not play the guitar, but that camera is his guitar. He's a rockstar. - Gene Simmons Mark's energy, his creativity, his drive, his positive attitude and his enthusiasm that make him one of the legends of rock photography. It's why his work--both old and new--is still so in demand today. Mark Weiss inspires greatness in all he turns his camera lens on. But don't take my word for it. Just look at the pictures in this book. --Dee Snider His pictures say as much as the music - Rob Halford He was one of the guys. He wasn't one of the 18 photographers you'd work with that day. - Alice Cooper He had that instinct, to recognize our energy and use his technical talent to capture it. - Joe Perry Mark Weissguy Weiss set an unmatched standard for rock photography. Starting out as a teenager by sneaking into concerts with a neighbor's 35mm camera, he embarked on a legendary career that took him around the globe and onto some of the most memorable album and magazine covers in rock history- featuring the likes of Van Halen, Ozzy Osbourne, Aerosmith, and M tley Cr e to Metallica, Guns N' Roses, Bon Jovi, and KISS, and so many more. With 700+ photos, brand new interviews, and stories from Mark himself, Decade that Rocked is a monument to the photography, friendships, and legacy of an artist that helped define one of rock's most iconic eras. This career-spanning collection features: A unique lens on the golden age of rock: Never-before or rarely seen photos of legends like Van Halen, Ozzy Osbourne, Aerosmith, and M tley Cr e to Metallica, Guns N' Roses, Bon Jovi, and KISS, as well as countless others whose sound and image defined the era. Exclusive interviews: Ozzy Osbourne, Dee Snider, Nikki Sixx, Joe Perry, Rob Halford, and many more recall their memories of this era-defining decade. Untold Stories: Relive Mark's unbelievable journey through rock history, from getting arrested for selling photos outside of Kiss concert to touring with legends like Van Halen, to photographing Bon Jovi's infamous Slippery When Wet shoot, shooting backstage at Live Aid with Black Sabbath, and so many more. Definitive Lens: Creem magazine readers ranked Mark Weiss as rock's top photographer of the 80s. His work has appeared on some of the most iconic album and magazine covers of all time. Captured from the unique vantage point of a photographer who lived and breathed the '80s in all its grit and glory, The Decade That Rocked brings to life the no-holds-barred sounds and sights that changed the world of hard rock and metal forever.