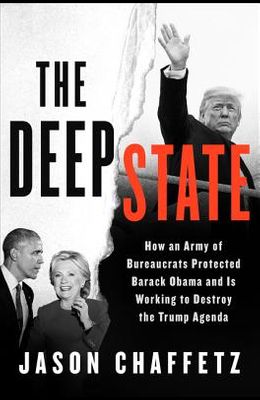 The Deep State: How an Army of Bureaucrats Protected Barack Obama and Is Working to Destroy the Trump Agenda

Former Congressman and current Fox News contributor Jason Chaffetz explains how we ended up with a federal government that actively works to defend the Democratic party and undermine Trump. The liberal media frequently declares the Obama years were free of scandal. They pretend this is true because every office in the Executive Branch worked to slow the information about Hillary's e-mails, the cover-up of Benghazi, the IRS, and so much more. Yet these same tight-lipped lifers leaked like a sieve once President Trump was sworn in, making it sound like everything he does is the new Watergate. In Deep State , Jason Chaffetz explains how the federal government has grown into a branch of the Democratic party of the past decade or more. The former chairman of the House Oversight committee explains what really happened during the Obama administration, and how we can start to undo the damage caused by this army of liberal sycophants, and build a better future.

From the Back Cover How did the Deep State become so unstoppable? The Deep State is real. They don't like exposure, accountability, or responsibility. They fight back, outlast, and work the system to their advantage. Sometimes even conservatives talk about the Deep State as though it's just dumb, inefficient bureaucracy. In fact, just the opposite is true. The Deep State is unconstitutional, organized, and exceptionally good at protecting themselves from supervision. As chairman of the House Oversight and Government Reform Committee, Jason Chaffetz was the tip of the spear challenging the Deep State and trying to hold them accountable. He took on the powerful forces at the IRS, the EPA, the DOJ, the Department of State, and others. The deeper I dove in, the more shocking the brazen approach by the power brokers. They were used to operating anonymously and without consequence. This is a problem bigger than we can even imagine and getting worse unless we do something dramatic to wrestle back control. His stories are as enraging as they are endless. Every department employs highly paid workers whose primary role is to keep their work secret from Congress and the public. Every department has an agenda they believe cannot be constrained by the democratic process. Every department is filled with people who believe they deserve steadily rising paychecks for less work than they would have to do at a private company. While this metastasizing corruption tends to support Democrats, they will work with any party that lets them grow unchecked. That's why they feel they must stop the anti-establishment agenda of Donald Trump. The Deep State has been in place for a long time. In this surprisingly entertaining and optimistic book, Jason Chaffetz highlights their tactics, illuminates the problems, and offers a way to fight back and win.