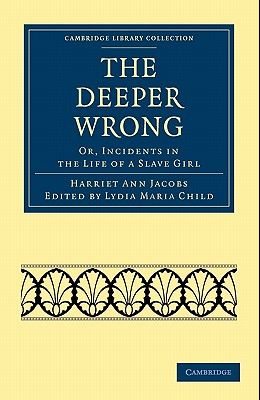 The Deeper Wrong: Or, Incidents in the Life of a Slave Girl

Harriet Ann Jacobs (1813 1897) was born into slavery in North Carolina, but escaped to the north to flee her owner's sexual advances. This autobiography was published under a pseudonym in 1861 to protect her family. She became involved with the Anti-Slavery Society, speaking at meetings in support of abolition. The book was aimed at middle-class white women, and stresses the impact of slavery on women's chastity, as slaves were frequently sexually exploited. She is highly critical of the nominal Christianity of the culture of the southern States. Much of the narrative deals with her efforts to regain her children, who had remained her master's property. Jacobs' first-hand account was an early publication of its type, and many found the abuse she suffered shocking and unbelievable. Jacobs became a role model for freed slaves, in taking control of her life, and helping others to adapt through education.