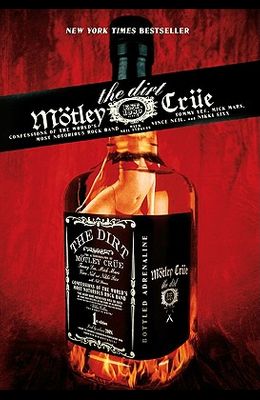 The Dirt: Confessions of the World's Most Notorious Rock Band

by
Tommy Lee and Vince Neil and Nikki Sixx

The members of the heavy metal band M]tley Cre--Tommy Lee, Mick Mars, Vince Neil, and Nikki Sixx--reveal all in this provocatively written and brilliantly designed account of the most infamous rock band in the world. Includes more than 100 photos, some in color.

From the Back Cover The most influential, enduring, and iconic metal band of the 1980's reveals everything a tell-all of epic proportions. This unbelievable autobiography explores the rebellious lives of four of the most influential icons in American rock history. Mötley Crüe was the voice of a barely pubescent Generation X, the anointed high priests of backward-masking pentagram rock, pioneers of Hollywood glam, and the creators of MTV's first power ballad. Their sex lives claimed celebrities from Heather Locklear to Pamela Anderson to Donna D'Errico. Their scuffles involved everyone from Axl Rose to 2LiveCrew. Their hobbies have included collecting automatic weapons, cultivating long arrest records, pushing the envelope of conceivable drug abuse, and dreaming up backstage antics that would make Ozzy Osbourne blanch with modesty. Provocatively written and brilliantly designed, this book includes over 100 photos, many never before published, for the most exciting and insightful look ever into the Crüe.