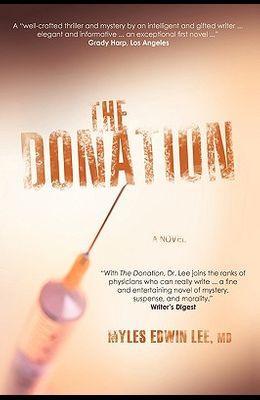 Sometimes it hurts to give...and to receive. Really hurts. Judge Joseph Spencer needs a heart transplant. It's taken a lot of fast talking from his wife and doctor to convince him, but he's finally capitulated. While in preoperative holding and just minutes before his surgery, Spencer recognizes the donor of his new heart-a man guilty of a ruthless crime. Spencer's sedation makes it impossible for him to protest this unimaginable horror, and he loses consciousness before anything can be done. Spencer's doctor, chief heart-transplant surgeon Ross Fairing, confronts his own consternation that a courageous and innovative operation has created an ethical conundrum that could destroy his transplant program. But even more, it could erode the public's trust in its physicians, reduce the criminal justice system to ineptitude, and facilitate civil disorder. Spencer survives the surgery but becomes suicidal, leading Fairing to uncover a deadly hospital conspiracy. A disgruntled surgeon and a vindictive cardiology fellow are involved with a member of the criminal justice system whose personal agenda could destroy all that Fairing has worked for-and end Spencer's life in the process. Morality and medicine collide with the criminal justice system in The Donation , shining light on one of the most pressing and controversial issues in the medical field today.