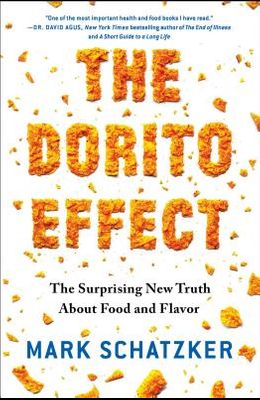 The Dorito Effect: The Surprising New Truth about Food and Flavor

A lively argument from an award-winning journalist proving that the key to reversing America's health crisis lies in the overlooked link between nutrition and flavor: The Dorito Effect is one of the most important health and food books I have read (Dr. David B. Agus, New York Times bestselling author). We are in the grip of a food crisis. Obesity has become a leading cause of preventable death, after only smoking. For nearly half a century we've been trying to pin the blame somewhere--fat, carbs, sugar, wheat, high-fructose corn syrup. But that search has been in vain, because the food problem that's killing us is not a nutrient problem. It's a behavioral problem, and it's caused by the changing flavor of the food we eat. Ever since the 1940s, with the rise of industrialized food production, we have been gradually leeching the taste out of what we grow. Simultaneously, we have taken great leaps forward in technology, creating a flavor industry, worth billions annually, in an attempt to put back the tastes we've engineered out of our food. The result is a national cuisine that increasingly resembles the paragon of flavor manipulation: Doritos. As food--all food--becomes increasingly bland, we dress it up with calories and flavor chemicals to make it delicious again. We have rewired our palates and our brains, and the results are making us sick and killing us. With in-depth historical and scientific research, The Dorito Effect casts the food crisis in a fascinating new light, weaving an enthralling tale of how we got to this point and where we are headed. We've been telling ourselves that our addiction to flavor is the problem, but it is actually the solution. We are on the cusp of a new revolution in agriculture that will allow us to eat healthier and live longer by enjoying flavor the way nature intended.

Books like The Dorito Effect: The Surprising New Truth about Food and Flavor

List of All Editions of The Dorito Effect: The Surprising New Truth about Food and Flavor