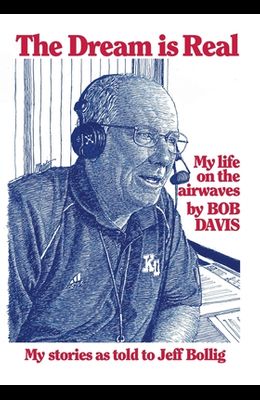 The Dream is Real: (My Life on the Airwaves)

The Dream is Real You've heard and watched the games, now go behind the scenes to get the skinny on the humor, drama and strategy behind them. The Dream is Real is a look back at the award-winning career of broadcaster Bob Davis. From the days of his childhood watching 17-year-old and future New York Yankee Hall-of-Famer Mickey Mantle play shortstop for the Class D Independence (Kan.) Yankees; to calling an NAIA national basketball championship; broadcasting eight NCAA Final Fours; doing an Orange Bowl champion; and being in the booth for major league baseball; sports has been his passion. Davis uses his folksy style, quick wit and engaging humor -- just as he did on the air -- as he looks back at the games and people he met along the way. His story is complemented by the memories of coaches, athletes, broadcasting peers, family and friends for this trip back down memory lane which included Davis broadcasting nearly 5,000 games over 48 years. Those contributors include Bill Self, Kevin Harlan, Roy Williams, Mitch Holthus, Tony Muser, Denny Matthews, Mark Mangino, Jim Nantz, Larry Brown, Dick Vitale, Glen Mason, Ryan Lefebrve, Danny Manning, Holly Rowe, Mike Sweeney and a host of other sports personalities. And you'll also hear from people whose names weren't in lights, but nevertheless played an integral role in the story of Bob's life -- a Sunday school student, a high school football coach, his son Steven, co-workers, broadcasting partners and more. The journey began when Davis had to tell his dad he was quitting law school after one year to pursue a career in broadcasting. From there we learn of his receiving 50 rejection letters before landing a DJ position at KAYS in Hays, Kan. He parlayed that into a 16-year stint where he became one of the most popular people in Hays, serving as the conduit between the fans and their beloved Hays High Indians, Thomas More Prep Monarchs and Fort Hays State Tigers. His talents were well-known and in demand and his next calling was a 32-year run as the Voice of the Kansas Jayhawks. He also managed to find time to spend 20 years working at KMBZ radio during that time. Davis capped his career by broadcasting the sport which attracted him to the profession as he spent 16 years in radio and television with the Kansas City Royals. Bob Davis is a people person and readers will enjoy the meeting and reading about the characters he introduces throughout the story of his life. You'll learn about the size 20 EEEE shoe that sat upon the register at Goodwin's Sportings Goods. There are the numerous stories and touching memories involving long-time broadcast partners Max Falkenstien and Paul Splittorff. Of course, there are the many humorous on-air and off-air interactions that are certain to leave readers in stitches. Then there are the road trips -- the hijinks experienced on planes, trains and automobiles will leave you in stitches. Lastly, you will get to relive the outstanding performances and competitions that captured our attention and imagination for almost half a century. Bob Davis is in more halls of fame than one can count. After reading The Dream is Real, you'll come to learn why he was so highly regarded as a broadcaster. But you'll also understand why he is considered a hall-of-fame person. All he ever wanted to do is tell stories about sports on the radio. And we as fans are fortunate to have had the opportunity to listen in.

Frequently Asked Questions About The Dream is Real: (My Life on the Airwaves)

List of All Editions of The Dream is Real: (My Life on the Airwaves)