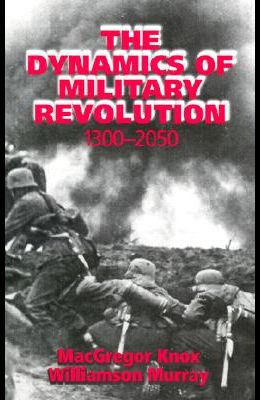 by
and MacGregor Knox and Williamson Murray

The Dynamics of Military Revolution bridges a major gap in the emerging literature on revolutions in military affairs. It suggests that two very different phenomena have been at work over the past centuries: military revolutions, which are driven by vast social and political changes, and revolutions in military affairs, which military institutions have directed, although usually with great difficulty and ambiguous results. MacGregor Knox and Williamson Murray provide a conceptual framework and historical context for understanding the patterns of change, innovation, and adaptation that have marked war in the Western world since the fourteenth century--beginning with Edward III's revolution in medieval warfare, through the development of modern military institutions in seventeenth-century France, to the military impact of mass politics in the French Revolution, the cataclysmic military-industrial struggle of 1914-1918, and the German Blitzkrieg victories of 1940. Case studies and a conceptual overview offer an indispensible introduction to revolutionary military change, --which is as inevitable as it is difficult to predict. Macgregor Knox is the Stevenson Professor of International History at the London School of Economics and Political Science. He is the author of Common Destiny (Cambridge, 2000) and Hitler's Italian Allies (Cambridge, 2000). Knox and Murray are co-editors of Making of Strategy (Cambridge, 1996). Willamson Murray is Senior Fellow at the Institute for Defense Analysis. He is the co-editor of Military Innovation in the Interwar Period (Cambridge, 1996) and author of A War to Be Won (Harvard University Press, 2000).