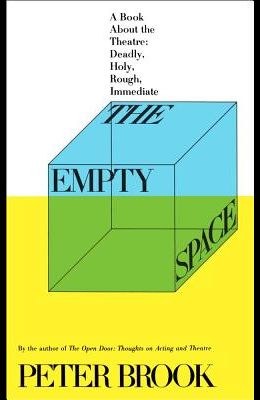 The Empty Space: A Book about the Theatre: Deadly, Holy, Rough, Immediate

From director and cofounder of the Royal Shakespeare Company Peter Brook, The Empty Space is a timeless analysis of theatre from the most influential stage director of the twentieth century. As relevant as when it was first published in 1968, groundbreaking director and cofounder of the Royal Shakespeare Company Peter Brook draws on a life in love with the stage to explore the issues facing a theatrical performance--of any scale. He describes important developments in theatre from the last century, as well as smaller scale events, from productions by Stanislavsky to the rise of Method Acting, from Brecht's revolutionary alienation technique to the free form happenings of the 1960s, and from the different styles of such great Shakespearean actors as John Gielgud and Paul Scofield to a joyous impromptu performance in the burnt-out shell of the Hamburg Opera just after the war. Passionate, unconventional, and fascinating, this book shows how theatre defies rules, builds and shatters illusions, and creates lasting memories for its audiences.