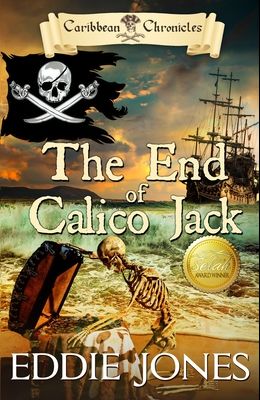 The End of Calico Jack

In this YA pirate tale, award-winning author Eddie Jones blends action, adventure, and humor into a fictional retelling of the pirate exploits of Calico Jack, Anne Bonny, and Mary Read. While searching for rumored treasure in a cave on Coffin Cay, a small island off the southwestern tip of Haiti (Hispaniola), Ricky suffers an absence seizure. During his last trance-like episode, Ricky uncovered a treasure from the Nuestra Se ora de Riqueza, a vessel in an armada of ships sailing the Spanish Main. Now back on Coffin Cay with his parents, Ricky hunts for the treasure he found in the cave over three hundred years earlier during his trip back to pirate land. The End of Calico Jack i s a fictional retelling of the pirate escapades of Calico Jack, Anne Bonny, and Mary Read. The story is based on historical research of the life of Calico Jack John Rackham. Some liberties have been taken in the telling of the story, but many of the events reflect what historians believed happened to Jack, Mary, and Anne. Also, in real life those who suffer absence seizures may appear to be in a trance but cannot recall what happens during their episode. The book includes a PIRATE MAP of Calico Jack's sailing routes and the ports he visited. The End of Calico Jack is the 2020 Selah Award Winner for YA Literature Readers Are Leaders The Caribbean Chronicles Series is a popular book series for boys who don't like to read. Written for the General Market (G) (I): Contains no ; sexual dialogue or strong language.