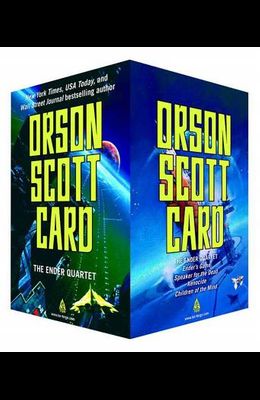 The Ender Quartet Boxed Set: Ender's Game, Speaker for the Dead, Xenocide, Children of the Mind

This boxed set contains Orson Scott Card's Ender's Game , Speaker for the Dead , Xenocide , and Children of the Mind . Ender's Game Winner of the Hugo and Nebula Awards In order to develop a secure defense against a hostile alien race's next attack, government agencies breed child geniuses and train them as soldiers. A brilliant young boy, Andrew Ender Wiggin lives with his kind but distant parents, his sadistic brother Peter, and the person he loves more than anyone else, his sister Valentine. Peter and Valentine were candidates for the soldier-training program but didn't make the cut--young Ender is the Wiggin drafted to the orbiting Battle School for rigorous military training. Ender's skills make him a leader in school and respected in the Battle Room, where children play at mock battles in zero gravity. Yet growing up in an artificial community of young soldiers Ender suffers greatly from isolation, rivalry from his peers, pressure from the adult teachers, and an unsettling fear of the alien invaders. His psychological battles include loneliness, fear that he is becoming like the cruel brother he remembers, and fanning the flames of devotion to his beloved sister. Is Ender the general Earth needs? But Ender is not the only result of the genetic experiments. The war with the Buggers has been raging for a hundred years, and the quest for the perfect general has been underway for almost as long. Ender's two older siblings are every bit as unusual as he is, but in very different ways. Between the three of them lie the abilities to remake a world. If, that is, the world survives. Speaker for the Dead In the aftermath of his terrible war, Ender Wiggin disappeared, and a powerful voice arose: The Speaker for the Dead, who told the true story of the Bugger War. Now, long years later, a second alien race has been discovered, but again the aliens' ways are strange and frightening...again, humans die. And it is only the Speaker for the Dead, who is also Ender Wiggin the Xenocide, who has the courage to confront the mystery...and the truth. Xenocide The war for survival of the planet Lusitania will be fought in the hearts of a child named Gloriously Bright. On Lusitania, Ender found a world where humans and Pequeninos and the Hive Queen could all live together; where three very different intelligent species could find common ground at last. Or so he thought. Lusitania also harbors the descolada, a virus that kills all humans it infects, but which the Pequeninos require in order to become adults. The Starways Congress so fears the effects of the descolada, should it escape from Lusitania, that they have ordered the destruction of the entire planet, and all who live there. The Fleet is on its way, a second xenocide seems inevitable. Children of the Mind The planet Lusitania is home to three sentient species: the Pequeninos; a large colony of humans; and the Hive Queen, brought there by Ender. But once against the human race has grown fearful; the Starways Congress has gathered a fleet to destroy Lusitania. Jane, the evolved computer intelligence, can save the three sentient races of Lusitania. She has learned how to move ships outside the universe, and then instantly back to a different world, abolishing the light-speed limit. But it takes all the processing power available to her, and the Starways Congress is shutting down the Net, world by world. Soon Jane will not be able to move the ships. Ender's children must save her if they are to save themselves.