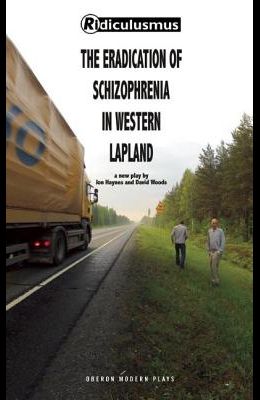 The Eradication of Schizophrenia in Western Lapland

by
David Woods and Jon HaynesRidiculusmus

Mediterranean roasted vegetables. Finnish Folk and Margaret Drabble. Adolf Hitler and the knitted cover for a toilet roll. An audience split in two experiencing auditory hallucinations. The new work from acclaimed theatre company Ridiculusmus is inspired by a treatment method for psychosis that has virtually eradicated schizophrenia from Western Lapland. The text is syncopated and harmonised throughout with duets on words and phrases, cooking up a dizzying concoction of memory, delusion and reality that culminates in a unified third act of denouement set between the past and present - the crucial defining moment of the protagonist's life. It conjures up a comic nightmare of delusion while offering a hopeful world of polyphonic uncertainty, a world where dialogue can transform your life. Ridiculusmus has been producing seriously funny theatre for over 20 years. The company is led by David Woods and Jon Haynes, who write, direct and perform. Ridiculusmus' origins are in the shadowlands of theatre and comedy. They began as a rabble of graduates from the Poor School in London adapting comic novels for the London fringe and have evolved over the last quarter century into a robust double act. Driving and leading as author-actors, the company's co-artistic directors David Woods and Jonathan Haynes have established the company as a flagship UK performance group touring nationally and internationally with works passionately wrought from minimal resources, and with an oxymoronic aim: to be both serious and funny. Embedded here is an argument for a different treatment for mental illness, practised in Finland, that embraces dialogue with a community, not just a patient...it's a startling piece of work that challenges how you listen and fathom what you hear. - Guardian ...intelligent, formally liberated and bloody peculiar...as both seriously thought-provoking and seriously funny theatre, it sees Ridiculusmus (remaining) at the very top of their game. - Exeunt Magazine Writers Jon Haynes and David Woods, drawing inspiration from the 'Open Dialogue' method of dealing with schizophrenia, have created a perplexing piece of theatre that baffles and confounds with precision and structural flair. - A Younger Theatre As a theatrical approximation of what one might imagine insanity to be like it is remarkable, virtuosic stuff. - Time Out London The piece is intriguing, and whilst it is not the most succinct or snappy piece of theatre you will ever see, it provokes a discussion which is most certainly needed. - Public Reviews 'Highly intelligent writing...This piece genuinely takes you into a land where you have nothing to hold on to.' - Everything Theatre ' It is more thought-provoking than sensational and that seems entirely appropriate for a play which opens a dialogue on art and speech as therapy.' - What's On Stage