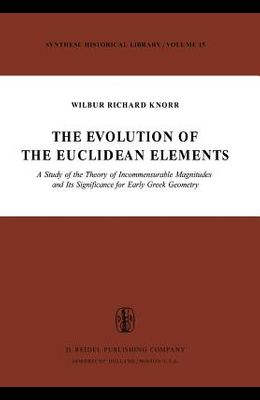 The Evolution of the Euclidean Elements: A Study of the Theory of Incommensurable Magnitudes and Its Significance for Early Greek Geometry

The present work has three principal objectives: (1) to fix the chronology of the development of the pre-Euclidean theory of incommensurable magnitudes beginning from the first discoveries by fifth-century Pythago- reans, advancing through the achievements of Theodorus of Cyrene, Theaetetus, Archytas and Eudoxus, and culminating in the formal theory of Elements X; (2) to correlate the stages of this developing theory with the evolution of the Elements as a whole; and (3) to establish that the high standards of rigor characteristic of this evolution were intrinsic to the mathematicians' work. In this third point, we wish to counterbalance a prevalent thesis that the impulse toward mathematical rigor was purely a response to the dialecticians' critique of foundations; on the contrary, we shall see that not until Eudoxus does there appear work which may be described as purely foundational in its intent. Through the examination of these problems, the present work will either alter or set in a new light virtually every standard thesis about the fourth-century Greek geometry. I. THE PRE-EUCLIDEAN THEORY OF INCOMMENSURABLE MAGNITUDES The Euclidean theory of incommensurable magnitudes, as preserved in Book X of the Elements, is a synthetic masterwork. Yet there are detect- able seams in its structure, seams revealed both through terminology and through the historical clues provided by the neo-Platonist commentator Proclus.