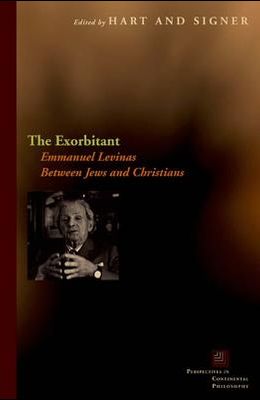 The Exorbitant: Emmanuel Levinas Between Jews and Christians

by
and Kevin Hart and Michael A Signer

We are exorbitant, and rightly so, when we cut any link we may have to cosmological powers. Levinas invites us to be exorbitant by distancing ourselves from visions of metaphysics, epistemology, and theology. We begin to listen well to Levinas when we hear him inviting us to break completely with the pagan world in which the gods are simply the highest beings in the cosmos and learn to practice an adult religion in which God is outside cosmology and ontology. God comes to mind neither in our attempts to think him as the creator of the cosmos nor in moments of ecstasy but in acts of genuine holiness, such as sharing a piece of bread with someone in a time of desperate need. Levinas, in short, enjoins us to be exorbitant in our dealings with one another. This book asks how the between of Levinas's thinking facilitates a dialogue between Jews and Christians. In one sense, Levinas stands exactly between Jews and Christians: ethics, as he conceives it, is a space in which religious traditions can meet. At the same time, his position seems profoundly ambivalent. No one can read a page of his writings without hearing a Jewish voice as well a a philosophical one. Yet his talk of substitution seems to resonate with Christological themes. On occasion, Levinas himself sharply distinguishes Judaism from Christianity--but to what extent can his thinking become the basis for a dialogue between Christians and Jews? This book, with a stellar cast of contributors, explores these questions, thereby providing a snapshot of the current state of Jewish-Christian dialogue.