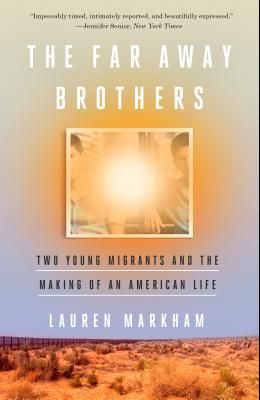 The Far Away Brothers: Two Young Migrants and the Making of an American Life

The deeply reported story of identical twin brothers who escape El Salvador's violence to build new lives in California--fighting to survive, to stay, and to belong. Growing up in rural El Salvador in the wake of the civil war, the United States was a distant fantasy to identical twins Ernesto and Raul Flores--until, at age seventeen, a deadly threat from the region's brutal gangs forces them to flee the only home they've ever known. In this urgent chronicle of contemporary immigration, journalist Lauren Markham follows the Flores twins as they make their way across the Rio Grande and the Texas desert, into the hands of immigration authorities, and from there to their estranged older brother in Oakland, CA. Soon these unaccompanied minors are navigating school in a new language, working to pay down their mounting coyote debt, and facing their day in immigration court, while also encountering the triumphs and pitfalls of teenage life with only each other for support. With intimate access and breathtaking range, Markham offers an unforgettable testament to the migrant experience. NAMED ONE OF THE BEST BOOKS OF THE YEAR BY THE NEW YORK TIMES BOOK REVIEW - WINNER OF THE RIDENHOUR BOOK PRIZE - FINALIST FOR THE LOS ANGELES TIMES BOOK PRIZE - FINALIST FOR THE CALIFORNIA BOOK AWARD - SHORTLISTED FOR THE J. ANTHONY LUKAS BOOK PRIZE - LONGLISTED FOR THE PEN/BOGRAD WELD PRIZE FOR BIOGRAPHY