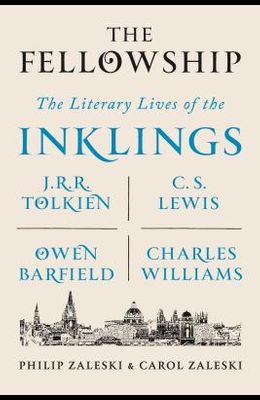 Best Book of June 2015 (The Christian Science Monitor) Book of the Year by the Conference on Christianity and Literature C. S. Lewis is the 20th century's most widely read Christian writer and J.R.R. Tolkien its most beloved mythmaker. For three decades, they and their closest associates formed a literary club known as the Inklings, which met every week in Lewis's Oxford rooms and in nearby pubs. They discussed literature, religion, and ideas; read aloud from works in progress; took philosophical rambles in woods and fields; gave one another companionship and criticism; and, in the process, rewrote the cultural history of modern times. In The Fellowship, Philip and Carol Zaleski offer the first complete rendering of the Inklings' lives and works. The result is an extraordinary account of the ideas, affections and vexations that drove the group's most significant members. C. S. Lewis accepts Jesus Christ while riding in the sidecar of his brother's motorcycle, maps the medieval and Renaissance mind, becomes a world-famous evangelist and moral satirist, and creates new forms of religiously attuned fiction while wrestling with personal crises. J.R.R. Tolkien transmutes an invented mythology into gripping story in The Lord of the Rings, while conducting groundbreaking Old English scholarship and elucidating, for family and friends, the Catholic teachings at the heart of his vision. Owen Barfield, a philosopher for whom language is the key to all mysteries, becomes Lewis's favorite sparring partner, and, for a time, Saul Bellow's chosen guru. And Charles Williams, poet, author of supernatural shockers, and strange acolyte of romantic love, turns his everyday life into a mystical pageant. Romantics who scorned rebellion, fantasists who prized reality, wartime writers who believed in hope, Christians with cosmic reach, the Inklings sought to revitalize literature and faith in the twentieth century's darkest years-and did so in dazzling style.

List of All Editions of The Fellowship: The Literary Lives of the Inklings: J.R.R. Tolkien, C. S. Lewis, Owen Barfield, Charles Williams