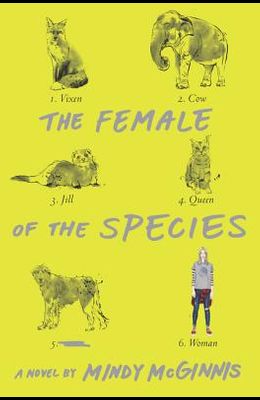 The Female of the Species

2017 Tayshas List Selection * YALSA Top 10 Best YA Fiction of 2017 * School Libray Journal Best of 2016 * Junior Library Guild Selection * The Globe and Mail Best Books of 2016 * Bustle's Best Young Adult Books of 2016 * Mashable's 8 Best YA Books of 2016 * Seventeen 's 10 Best YA Books of 2016 * CCBC Choices 2017 * 2018-2019 Louisiana Readers' Choice Award Nominee Edgar Award-winning author Mindy McGinnis delivers a relentless and riveting contemporary YA novel that examines rape culture through alternating perspectives. A stunning, unforgettable page-turner. Alex Craft knows how to kill someone. And she doesn't feel bad about it. Three years ago, when her older sister, Anna, was murdered and the killer walked free, Alex uncaged the language she knows best--the language of violence. While her own crime goes unpunished, Alex knows she can't be trusted among other people. Not with Jack, the star athlete who wants to really know her but still feels guilty over the role he played the night Anna's body was discovered. And not with Peekay, the preacher's kid with a defiant streak who befriends Alex while they volunteer at an animal shelter. Not anyone. As their senior year unfolds, Alex's darker nature breaks out, setting these three teens on a collision course that will change their lives forever.

From the Back Cover Alex Craft knows how to kill someone . And she doesn't feel bad about it. When her older sister, Anna, was murdered three years ago and the killer walked free, Alex uncaged the language she knows best. The language of violence. While her crime goes unpunished, Alex knows she can't be trusted among other people, even in her small hometown. She relegates herself to the shadows, a girl who goes unseen in plain sight, unremarkable in the high school hallways. But Jack Fisher sees her. He's the guy all other guys want to be: the star athlete gunning for valedictorian with the prom queen on his arm. Guilt over the role he played the night Anna's body was discovered hasn't let him forget Alex, and now her green eyes amid a constellation of freckles have his attention. He doesn't want to only see Alex Craft; he wants to know her. So does Peekay, the preacher's kid, a girl whose identity is entangled with her dad's job, though that does not stop her from knowing the taste of beer or missing the touch of her ex-boyfriend. When Peekay and Alex start working together at the animal shelter, a friendship forms and Alex's protective nature extends to more than just the dogs and cats they care for. Circumstances bring Alex, Jack, and Peekay together as their senior year unfolds. While partying one night, Alex's darker side breaks out, setting the teens on a collision course that will change their lives forever. Edgar Award--winning author Mindy McGinnis artfully crafts three alternating perspectives into a dark and riveting exploration of what it means to be the female of the species.