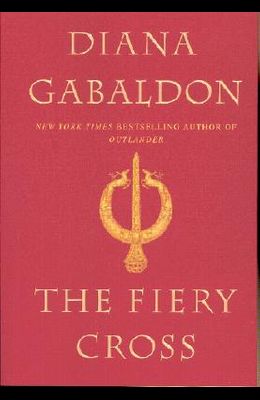 Book #5 in the Outlander Series
by
Diana Gabaldon

The Fiery Cross is the eagerly awaited fifth volume in Gabaldon's remarkable, award-winning series of historical novels. The year is 1771, and war is coming. Jamie Fraser's wife tells him so. Little as he wishes to, he must believe it, for hers is a gift of dreadful prophecy--a time-traveler's certain knowledge. Outlander, the first book in the saga, has been optioned for a TV mini-series.

From the front Cover New York Times bestselling author of Outlander Diana Gabaldon mesmerized readers with her award-winning Outlander novels, four dazzling New York Times bestsellers featuring 18th-century Scotsman James Fraser and his 20th-century time-traveling wife, Claire Randall. Now, in this eagerly awaited fifth volume, Diana Gabaldon continues their extraordinary saga, a masterpiece of pure storytelling and her most astonishing Outlander novel yet.... The year is 1771, and war is coming. Jamie Fraser's wife tells him so. Little as he wishes to, he must believe it, for hers is a gift of dreadful prophecy -- a time-traveler's certain knowledge. Born in the year of Our Lord 1918, Claire Randall served England as a nurse on the battlefields of World War II, and in the aftermath of peace found fresh conflicts when she walked through a cleftstone on the Scottish Highlands and found herself an outlander, an English lady in a place where no lady should be, in a time -- 1743 -- when the only English in Scotland were the officers and men of King George's army. Now wife, mother, and surgeon, Claire is still an outlander, out of place, and out of time, but now, by choice, linked by love to her only anchor -- Jamie Fraser. Her unique view of the future has brought him both danger and deliverance in the past; her knowledge of the oncoming revolution is a flickering torch that may light his way through the perilous years ahead -- or ignite a conflagration that will leave their lives in ashes.... Grand, sweeping, utterly unforgettable, Diana Gabaldon's new novel is riveting entertainment, a vibrant tapestry of history and human drama. Crossing the boundaries of genre with its unrivaledstorytelling, The Fiery Cross is a gift both to her millions of loyal fans and to the lucky readers who have yet to discover her.