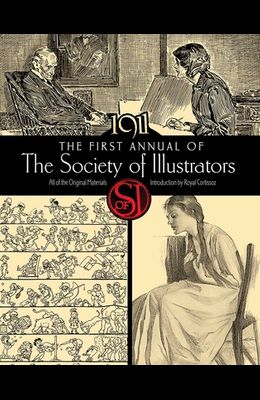 The First Annual of the Society of Illustrators, 1911

by
Society of Illustr Illustrators and Royal Cortissoz

A New York City-based institution founded in 1901, the Society of Illustrators remains dedicated to promoting the art of illustration. Ten years after its 1901 founding, the organization resolved to publish an annual compilation of the year's best illustrations by its members. The custom endures to the present day, and the Illustrators Annual remains among the most prestigious publications in its field. This, the first of the organization's annuals, features 85 images by several of the most influential illustrators of the twentieth century, including Frederic Remington, James Montgomery Flagg, Franklin Booth, Charles Dana Gibson, and many others. This new edition reprints the original publication's Introduction by Royal Cortissoz, a highly regarded art critic of the day. Past Society president Dennis Dittrich provides a Foreword, setting the work in context for today's readers and modern-day students of illustration.