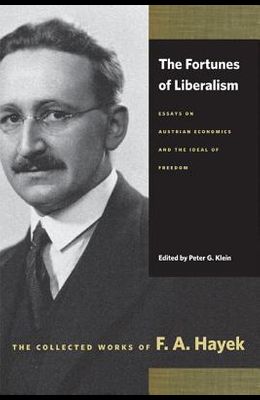 The Fortunes of Liberalism: Essays on Austrian Economics and the Ideal of Freedom

by
F A Hayek and Peter G Klein

In this collection of essays, some of which appear here in English for the first time, F. A. Hayek traces his intellectual roots to the Austrian school. The Fortunes of Liberalism: Essays on Austrian Economics and the Ideal of Freedom also links the Austrian school to the modern rebirth of classical liberal thought. F. A. Hayek (1899-1992), recipient of the Medal of Freedom in 1991 and co-winner of the Nobel Memorial Prize in Economic Sciences in 1974, was a pioneer in monetary theory and one of the principal proponents of classical liberal thought in the twentieth century. He taught at the London School of Economics, the University of Chicago, and the University of Freiburg. Peter G. Klein is Associate Professor in the Division of Applied Social Sciences at the University of Missouri and Associate Director of the Contracting and Organizations Research Institute. He is also Adjunct Professor at the Olin School of Business.