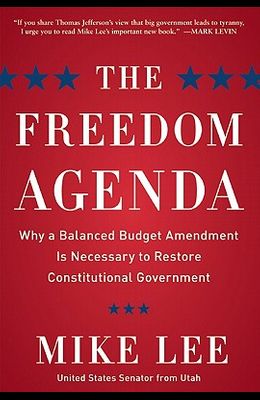 The Freedom Agenda: Why a Balanced Budget Amendment Is Necessary to Restore Constitutional Government

AMERICA IS BANKRUPT As the federal government crashes through one debt ceiling after another, Americans are facing a grim future of inflation, economic stagnation, and ultimately, national insolvency. Our increasingly desperate situation stems from a broken political system in which Congress brazenly defies its constitutional limits, grabbing more and more power as it recklessly plunges our nation into the abyss. As one of Congress's leading budget hawks, Senator Mike Lee argues there is only one way to defuse our fiscal time bomb and permanently force fiscal responsibility on Congress: adopt a balanced budget amendment. In this urgent book, Senator Lee explains: How the fight for a balanced budget amendment is part of a larger battle to reign in our out-of-control Congress How balancing the budget will increase the individual liberty of every American How major federal programs can--and must--be eliminated How a balanced budget amendment can be designed without the loopholes spendthrift congressmen will want Why the chances of enacting a balanced budget amendment are better now than ever before History is littered with nations that were destroyed by wasteful spending. As Senator Lee shows in compelling detail, if America is to remain a land of freedom and opportunity, we must act now to eliminate our government's ruinous, unsustainable debt. With a balanced budget amendment, the fight for fiscal responsibility and limited government can be won--and as Senator Lee warns us, our liberty and prosperity depend on it.