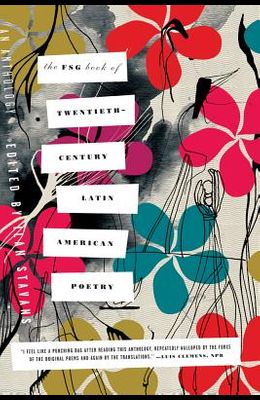 The Fsg Book of Twentieth-Century Latin American Poetry: An Anthology

A comprehensive, multi-lingual anthology of 20th-century Latin American Poetry in both Spanish and Portuguese. During a century of extraordinary change, poets became the chroniclers of deep polarizations. From Rub n Dar o's quest to renew the Spanish language to C sar Vallejo's linking of religion and politics, from Jorge Luis Borges's cosmopolitanism to Pablo Neruda's placement of poetry as uncompromising speaker for the downtrodden, and from Alejandra Pizarnik's agonies of the self to Humberto Ak'abal's examination of all things indigenous, it is through verse that the hemisphere's cantankerous collective soul in an age of overhaul might best be understood. A brilliant, moving, and thought-provoking summation of these forking paths, The FSG Book of Twentieth-Century Latin American Poetry invites us to look at an illustrious literary tradition with fresh eyes. Ilan Stavans, one of the foremost scholars of Hispanic culture and a distinguished translator, goes beyond easy geographical and linguistic categorizations. This bilingual anthology features eighty-four authors from sixteen different countries writing in Spanish, Portuguese, Mapuche, Nahuatl, Quechua, Mazatec, Zapotec, Ladino, and Spanglish. The poems are rendered into English in inspired fashion by first-rate translators such as Elizabeth Bishop, Galway Kinnell, W. S. Merwin, Alastair Reid, Mark Strand, and Richard Wilbur. In these pages the reader will experience the power of poetry to account for a hundred years in the life of a restless continent.

Books similiar to The Fsg Book of Twentieth-Century Latin American Poetry: An Anthology

List of All Editions of The Fsg Book of Twentieth-Century Latin American Poetry: An Anthology