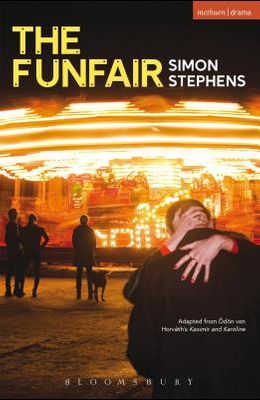 I kept telling myself I wanted something more out of my life, something brighter. I had all these ideas in my head. Thing is, I had to go down so low just to try to lift my life up a little bit higher. Simon Stephens's exciting new adaptation of the twentieth-century classic Kasimir and Karoline is a dark, political and hilarious play that sets two young lovers in the throes of a break-up against the hypnotic whirl and bright lights of a funfair. The Funfair takes us on a ride through the loops, dips and highs of one night at a fairground, exploring a crisis of capitalism set to the soundtrack of a rock and roll love song. The play received its world premiere at Manchester's Home Theatre on 14 May 2015 and was the theatre's first-ever production.