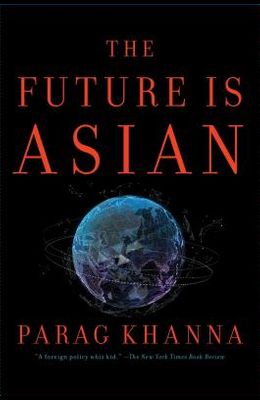 The Future Is Asian: Commerce, Conflict, and Culture in the 21st Century

A compelling, eye-opening argument about how Asia is creating a new template for the future of the world, from former US National Intelligence council advisor and current CNN Global Contributor, Parag Khanna. Asia is where the action is. Five billion people, one-third of the global economy, two-thirds of global economic growth, thirty of the Fortune 100 companies, six of the ten largest banks, eight of the ten largest armies, five nuclear powers, and massive technological innovation. Whether using demography, geography, or economy as a metric, Asia is already the present--and it is certainly the future. In The Future Is Asian , expert Parag Khanna explains that Asia is by far the most ethnically, linguistically, and culturally diverse region of the planet. Even for Asians, Asia is dizzying to navigate. That complexity leads to common misdiagnoses: Western ideas on Asia conflate the entire region with China, predict World War III around every corner, and regularly forecast debt-driven collapse for the region's major economies. But in the real world, India and Southeast Asia are now outpacing China, leaders put aside territorial disputes in favor of economic integration, and today's infrastructure investments are the platform for the next wave of digital growth. If the nineteenth century featured the Europeanization of the world, and the twentieth century its Americanization, then the twenty-first century is surely the time of Asianization. And we cannot afford to continue to get Asia so wrong, warns Khanna. Whether it's children taking Mandarin in grade school, or politicians singing the praises of its infrastructure and high-speed rails, Asia is firmly in our nation's consciousness. Now The Future Is Asian accurately shows Asia from the inside out, telling the story of how this mega-region is coming together and reshaping the entire planet at the same time.