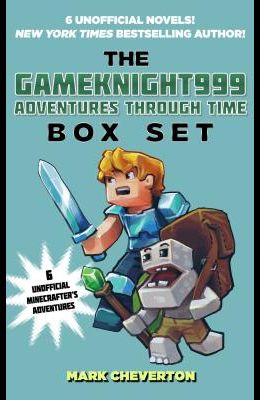 Gameknight999, a former Minecraft griefer, got a big dose of virtual reality when his father's invention teleported him into the game. Living out a dangerous adventure inside a digital world, he discovered that the Minecraft villagers were alive and needed his help to defeat the terrible endermen, zombies, and other monsters threatening the Overworld. As if that weren't bad enough, Gameknight's accidentally been sent back in time Facing familiar enemies he thought he'd defeated long ago, the User-that-is-not-a-user embarks on a dangerous journey through time, taking him through Minecraft's past and even through modded versions of the game, to worlds both bizarre and utterly alien. Included in the second Gameknight999 box set are the following books: The Birth of Herobrine -The Great Zombie Invasion -Attack of the Shadow-Crafters -Herobrine's War The Mystery of Entity303 -Terrors of the Forest -Monsters in the Mist -Mission to the Moon The Gameknight999 books are action-packed tributes to the worldwide gaming phenomenon of Minecraft, and each novel is filled with your favorite characters, biomes, and creatures from the actual game. Continuing the adventure of everyone's favorite Minecraft hero, The Gameknight999 Adventures Through Time Box Set is the perfect gift for any gaming fan.