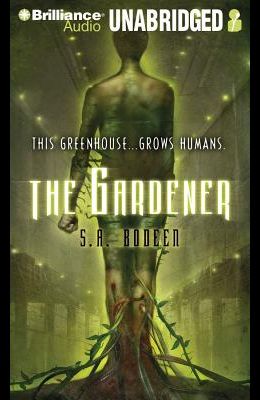 by
S A Bodeen and Luke Daniels

Mason has never known his father, but longs to. All he has of him is a DVD of a man whose face is never seen, reading a children's book. One day, on a whim, he plays the DVD for a group of comatose teens at the nursing home where his mother works. One of them, a beautiful girl, responds. Mason learns she is part of an experiment intended to render teenagers into autotrophs--genetically engineered, self-sustaining life-forms who don't need food or water to survive. And before he knows it, Mason is on the run with the girl, and wanted, dead or alive, by the mysterious mastermind of this horrible plan, who is simply called the Gardener. Will Mason be forced to destroy the thing he's longed for most?