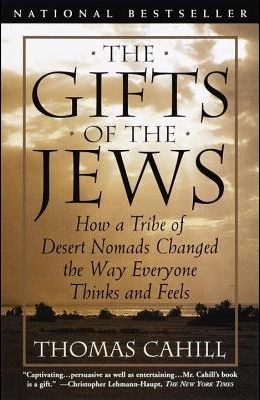 The Gifts of the Jews: How a Tribe of Desert Nomads Changed the Way Everyone Thinks and Feels

The bestselling author of How the Irish Saved Civilization reveals the critical change that made Western civilization possible, in this irresistible exploration of the origins of some of humankind's oldest and most closely held beliefs. Line drawings.

From the front Cover The author of the runaway bestseller How the Irish Saved Civilization has done it again. In The Gifts of the Jews Thomas Cahill takes us on another enchanting journey into history, once again recreating a time when the actions of a small band of people had repercussions that are still felt today. The Gifts of the Jews reveals the critical change that made western civilization possible. Within the matrix of ancient religions and philosophies, life was seen as part of an endless cycle of birth and death; time was like a wheel, spinning ceaselessly. Yet somehow, the ancient Jews began to see time differently. For them, time had a beginning and an end; it was a narrative, whose triumphant conclusion would come in the future. From this insight came a new conception of men and women as individuals with unique destinies--a conception that would inform the Declaration of Independence--and our hopeful belief in progress and the sense that tomorrow can be better than today. As Thomas Cahill narrates this momentous shift, he also explains the real significance of such Biblical figures as Abraham and Sarah, Moses and the Pharaoh, Joshua, Isaiah, and Jeremiah. Full of compelling stories, insights and humor, The Gifts of the Jews is an irresistible exploration of history as fascinating and fun as How the Irish Saved Civilization.

The Hinges of History Series In Order - By Thomas Cahill