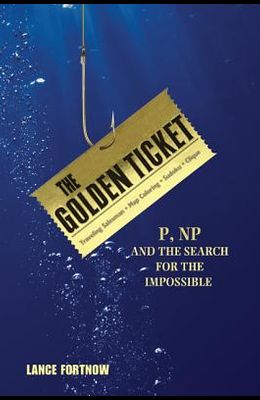 The Golden Ticket: P, Np, and the Search for the Impossible

The P-NP problem is the most important open problem in computer science, if not all of mathematics. Simply stated, it asks whether every problem whose solution can be quickly checked by computer can also be quickly solved by computer. The Golden Ticket provides a nontechnical introduction to P-NP, its rich history, and its algorithmic implications for everything we do with computers and beyond. Lance Fortnow traces the history and development of P-NP, giving examples from a variety of disciplines, including economics, physics, and biology. He explores problems that capture the full difficulty of the P-NP dilemma, from discovering the shortest route through all the rides at Disney World to finding large groups of friends on Facebook. The Golden Ticket explores what we truly can and cannot achieve computationally, describing the benefits and unexpected challenges of this compelling problem.

From the Back Cover You will love this book. It's completely accessible and captures the thrill, potential, and heartbreak of an edgy mathematical problem in terms that nonmathematicians will appreciate. After reading The Golden Ticket , I sort of hope P isn't NP after all. --Vint Cerf, Internet Pioneer The P-NP problem is fundamental to computer science, and indeed all of mathematics. This book presents an engaging exposition of the problem, its history, and importance. In the process, it touches on major topics appearing in university computer science courses, all presented in an amusing style requiring no background in mathematics beyond the ability to solve Sudoku puzzles. I highly recommend it. --Stephen Cook, formulator of the P-NP problem This book, written by a world-class master of the field, is a grand tour of the most celebrated and profound unsolved problem in computer science. Fortnow's many ingenious explanations make the mysteries of computational complexity accessible to anyone interested in the fundamental questions: what can be computed and how fast can we compute it? --John MacCormick, author of Nine Algorithms That Changed the Future This book is meticulous. Fortnow has really tracked down the history and background of this important and timely subject. Even complexity theorists will benefit from his fine scholarship. The Golden Ticket is the first of its kind--a book for general readers about complexity theory. --William Gasarch, University of Maryland Nobody explains the importance of the P-NP problem better than Fortnow. --William J. Cook, author of In Pursuit of the Traveling Salesman: Mathematics at the Limits of Computation