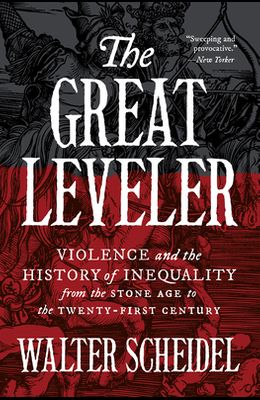 The Great Leveler: Violence and the History of Inequality from the Stone Age to the Twenty-First Century

Are mass violence and catastrophes the only forces that can seriously decrease economic inequality? To judge by thousands of years of history, the answer is yes. Tracing the global history of inequality from the Stone Age to today, Walter Scheidel shows that it never dies peacefully. The Great Leveler is the first book to chart the crucial role of violent shocks in reducing inequality over the full sweep of human history around the world. The Four Horsemen of leveling--mass-mobilization warfare, transformative revolutions, state collapse, and catastrophic plagues--have repeatedly destroyed the fortunes of the rich. Today, the violence that reduced inequality in the past seems to have diminished, and that is a good thing. But it casts serious doubt on the prospects for a more equal future. An essential contribution to the debate about inequality, The Great Leveler provides important new insights about why inequality is so persistent--and why it is unlikely to decline anytime soon.

From the Back Cover If you think you've heard it all about economic inequality, think again. Walter Scheidel's analysis of what really reduces inequality is provocative, but he makes the case with reason, evidence, and style. --Steven Pinker, author of The Better Angels of Our Nature: Why Violence Has Declined Brilliant, erudite, and chock-full of historical detail, The Great Leveler has a powerful message and asks a big question for the twenty-first century: Can we find a cure for inequality that isn't worse than the disease? --Branko Milanovic, author of Global Inequality: A New Approach for the Age of Globalization This is the best book on the history of income inequality. And the central message is that most significant reductions in inequality come through violence and destruction. Have a nice day! --Tyler Cowen, author of The Complacent Class: The Self-Defeating Quest for the American Dream This brilliant and thoroughly researched book solves a major paradox in the study of historical inequality. If we accept Thomas Piketty's rule that returns on capital are greater than the rate of economic growth, the 10,000 years of evolution since the Neolithic period should have resulted in all wealth becoming concentrated in the hands of a single individual or family. The Great Leveler explains why that didn't happen. A major breakthrough in our understanding of the historical dynamics of income and wealth inequality. --Peter Turchin, author of Ultrasociety: How 10,000 Years of War Made Humans the Greatest Cooperators on Earth Inequality and violence are fundamental features of human society. No one before Walter Scheidel has shown us just how closely they have been intertwined. This is a masterful new assessment of an age-old problem. --David Stasavage, coauthor of Taxing the Rich: A History of Fiscal Fairness in the United States and Europe The Great Leveler makes a convincing case. --Robert J. Gordon, author of The Rise and Fall of American Growth This superb, and superbly written, book justifies its profound but pessimistic conclusion that in world history inequality has declined significantly only as a result of violent changes caused by wars, state breakdown, or pandemics. It should have a huge impact on world historians and generate interesting and important debates about growing inequality in today's world. --David Christian, author of Maps of Time: An Introduction to Big History Walter Scheidel offers a fascinating and powerful analysis of how worldwide income and wealth inequality have evolved from the Neolithic revolution to today. No other book on inequality has the temporal breadth or reach of Scheidel's book. And his interpretation is strikingly new. --Philip T. Hoffman, author of Why Did Europe Conquer the World?