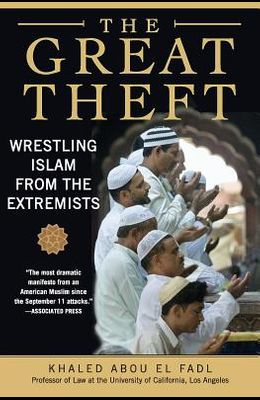 The Great Theft: Wrestling Islam from the Extremists

As the second-largest religion in the world, more than a billion Muslims turn to Islam for serenity and spiritual peace, as well as moral and ethical guidance. While the West sees extremists as the most visible adherents of Islam, moderates constitute the majority of Muslims worldwide. In The Great Theft, leading Islamic scholar Khaled Abou El Fadl argues that Islam is currently passing through a transformative moment no less dramatic than the Protestant Reformation. Two completely opposed worldviews within Islam are competing to define this great world religion, and the future of the Muslim world hangs in the balance. The Great Theft is an impassioned defense of Islam against the encroaching power of the extremists. From the role of women in Islam to the nature of jihad, from democracy and human rights to terrorism and warfare, Abou El Fadl builds a vital vision for a moderate Islam. Khaled M. Abou El Fadl is a distinguished Islamic jurist, scholar and professor of law at UCLA. He holds degrees from Yale University, University of Pennsylvania Law School and Princeton University, and received formal training in Islamic jurisprudence in Egypt and Kuwait. A staunch advocate of human rights, Abou El Fadl serves as an advisory board member for Human Rights Watch and was appointed by President George W. Bush to the U.S. Commission on International Religious Freedom. The Great Theft provides an uncommonly rich, learned and easily accessible framework for understanding the current theological struggle within Islam.... a compelling guide to contemporary Muslim intellectual discourse. - Washington Post Book World