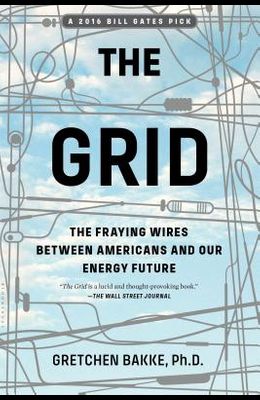 The Grid: The Fraying Wires Between Americans and Our Energy Future

A revelatory look at our national power grid--how it developed, its current flaws, and how it must be completely reimagined for our fast-approaching energy future. America's electrical grid, an engineering triumph of the twentieth century, is turning out to be a poor fit for the present. It's not just that the grid has grown old and is now in dire need of basic repair. Today, as we invest great hope in new energy sources--solar, wind, and other alternatives--the grid is what stands most firmly in the way of a brighter energy future. If we hope to realize this future, we need to reimagine the grid according to twenty-first-century values. It's a project which forces visionaries to work with bureaucrats, legislators with storm-flattened communities, moneymen with hippies, and the left with the right. And though it might not yet be obvious, this revolution is already well under way. Cultural anthropologist Gretchen Bakke unveils the many facets of America's energy infrastructure, its most dynamic moments and its most stable ones, and its essential role in personal and national life. The grid, she argues, is an essentially American artifact, one which developed with us: a product of bold expansion, the occasional foolhardy vision, some genius technologies, and constant improvisation. Most of all, her focus is on how Americans are changing the grid right now, sometimes with gumption and big dreams and sometimes with legislation or the brandishing of guns. The Grid tells--entertainingly, perceptively--the story of what has been called the largest machine in the world: its fascinating history, its problematic present, and its potential role in a brighter, cleaner future.

List of All Editions of The Grid: The Fraying Wires Between Americans and Our Energy Future