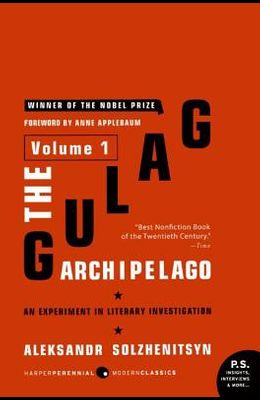 The Gulag Archipelago, 1918-1956: Volume 1: An Experiment in Literary Investigation

The history of the United Soviet Socialist Republics is a bloody one, especially before and during the time of Stalin. Tens of millions of innocent people were tortured, imprisoned and killed; entire minority populations were targeted. In The Gulag Archipelago, Aleksandr Solzhenitsyn draws a harrowing portrait of four decades of Soviet repression. Drawing on his own experiences before, during and after his eleven years of incarceration and exile, along with records from Soviet archives and the testimony of more than 200 fellow prisoners, Solzhenitsyn paints a shocking portrait of secret police operations, labor camps, prisons and executions. But The Gulag Archipelago is also the story of astonishing moral courage and incorruptibility amid brutality and degradation. Aleksandr I. Solzhenitsyn (1918-2008) was born in Kislovodsk, Russia in 1918. He was educated at the Moscow Institute of History, Philosophy and Literature and at the University of Rostov. He was a twice-decorated captain in the Soviet Army, but was stripped of his rank when arrested and convicted in 1945 of anti-Soviet actions. From 1945 until his exile from the U.S.S.R. in 1974 for treason, Solzhenitsyn was in and out of prisons and work camps. He settled in the United States and lived in relative isolation in Vermont. After twenty years in exile, Solzhenitsyn was welcomed back to his homeland in 1994. He was the recipient of many awards, including the Nobel Prize for Literature in 1970 and the Medal of Honor for Literature in 1993. The best nonfiction book of the twentieth century. -- TIME --George F. Kennan

From the Back Cover Volume 1 of the gripping epic masterpiece, Solzhenitsyn's chilling report of his arrest and interrogation, which exposed to the world the vast bureaucracy of secret police that haunted Soviet society