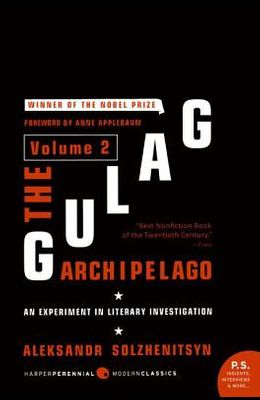 The Gulag Archipelago Volume 2: An Experiment in Literary Investigation

BEST NONFICTION BOOK OF THE 20 TH CENTURY -- Time Volume 2 of the Nobel Prize-winner's towering masterpiece: the story of Solzhenitsyn's entrance into the Soviet prison camps, where he would remain for nearly a decade. Features a new foreword by Anne Applebaum. The greatest and most powerful single indictment of a political regime ever leveled in modern times. --George F. Kennan It is impossible to name a book that had a greater effect on the political and moral consciousness of the late twentieth century. --David Remnick, The New Yorker Solzhenitsyn's masterpiece. ... The Gulag Archipelago helped create the world we live in today. --Anne Applebaum, Pulitzer Prize-winning author of Gulag: A History , from the foreword

From the Back Cover Volume 2 of the gripping epic masterpiece, The story of Solzhenitsyn's entrance into the Soviet prison camps, where he would remain for Nearly a decade