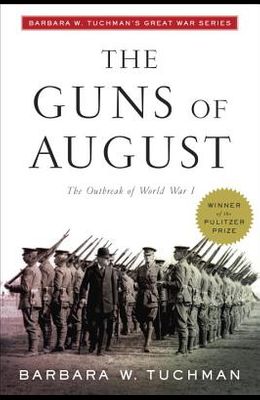 The Guns of August: The Outbreak of World War I; Barbara W. Tuchman's Great War Series

Selected by the Modern Library as one of the 100 best nonfiction books of all time The Proud Tower, the Pulitzer Prize-winning The Guns of August, and The Zimmerman Telegram comprise Barbara W. Tuchman's classic histories of the First World War era In this landmark, Pulitzer Prize-winning account, renowned historian Barbara W. Tuchman re-creates the first month of World War I: thirty days in the summer of 1914 that determined the course of the conflict, the century, and ultimately our present world. Beginning with the funeral of Edward VII, Tuchman traces each step that led to the inevitable clash. And inevitable it was, with all sides plotting their war for a generation. Dizzyingly comprehensive and spectacularly portrayed with her famous talent for evoking the characters of the war's key players, Tuchman's magnum opus is a classic for the ages. Praise for The Guns of August A brilliant piece of military history which proves up to the hilt the force of Winston Churchill's statement that the first month of World War I was 'a drama never surpassed.' -- Newsweek More dramatic than fiction . . . a magnificent narrative--beautifully organized, elegantly phrased, skillfully paced and sustained. -- Chicago Tribune A fine demonstration that with sufficient art rather specialized history can be raised to the level of literature. -- The New York Times The Guns of August ] has a vitality that transcends its narrative virtues, which are considerable, and its feel for characterizations, which is excellent. -- The Wall Street Journal

From the front Cover More dramtatic than fiction...THE GUNS OF AUGUST is a magnificent narrative--beautifully organized, elegantly phrased, skillfully paced and sustained....The product of painstaking and sophisticated research. CHICAGO TRIBUNE Historian and Pulitzer Prize-winning author Barbara Tuchman has brought to life again the people and events that led up to Worl War I. With attention to fascinating detail, and an intense knowledge of her subject and its characters, Ms. Tuchman reveals, for the first time, just how the war started, why, and why it could have been stopped but wasn't. A classic historical survey of a time and a people we all need to know more about, THE GUNS OF AUGUST will not be forgotten.

Books like The Guns of August: The Outbreak of World War I; Barbara W. Tuchman's Great War Series

List of All Editions of The Guns of August: The Outbreak of World War I; Barbara W. Tuchman's Great War Series