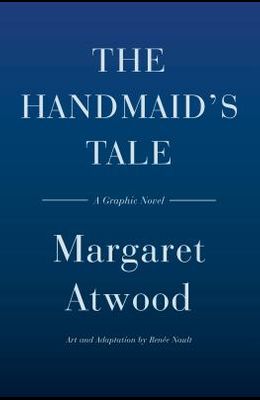 by
Margaret Atwood and Renee Nault

An instant classic when it was published in 1985, Atwood's genre-bending, dystopian story comes to life in this new, beautifully illustrated graphic novel. Margaret Atwood's best-loved novel has taken the world by storm again. Riding high on bestseller lists for months and the basis for Hulu's Emmy and Golden Globe Award-winning smash hit series, The Handmaid's Tale is everywhere--and it's primed for a stunning new graphic novel adaptation. The story is iconic: In the Republic of Gilead, a Handmaid named Offred lives in the home of the Commander, to the purpose that she become pregnant with his child. Stripped of her most basic freedoms, (work, property, her own name), Offred remembers a different time, not so long ago, when she was valuable for more than her viable ovaries, when she was mother to a daughter she could keep, and when she and her husband lived and loved as equals. Darkly prescient, scathingly sarcastic, and eminently frightening, The Handmaid's Tale has only gained relevance since it was originally published, and remains one of the most powerful, widely read stories of our times. This illustrated edition is a must-have for Atwood's growing legions of fans.