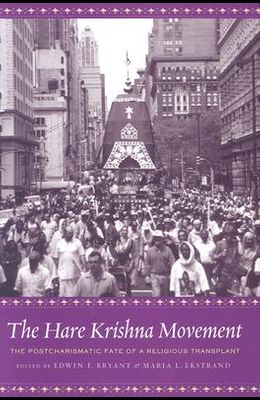 The Hare Krishna Movement: The Postcharismatic Fate of a Religious Transplant

by
and Edwin Bryant and Maria Ekstrand
$94.45
Select Format

Dancing and chanting with their shaven heads and saffron robes, Hare Krishnas presented the most visible face of any of the eastern religions transplanted to the West during the sixties and seventies. Yet few people know much about them. This comprehensive study includes more than twenty contributions from members, ex-members, and academics who have followed the Hare Krishna movement for years. Since the death of its founder, the movement, also known as the International Society for Krishna Consciousness (ISKCON), has experienced debates over the roles of authority, heresy, and dissent, which have led to the development of several splinter movements. There is a growing women's rights movement and a highly publicized child abuse scandal. Providing a privileged look at the people and issues shaping ISKCON, this volume also offers insight into the complex factors surrounding the emergence of religious traditions, including early Christianity, as well as a glimpse of the original seeds and the germinating stages of a religious tradition putting down roots in foreign soil.

List of All Editions of The Hare Krishna Movement: The Postcharismatic Fate of a Religious Transplant