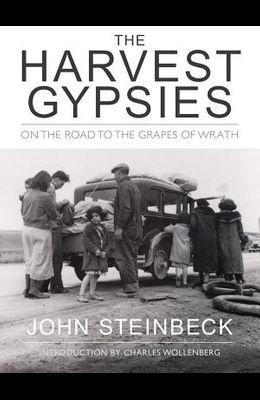 by
John Steinbeck and Charles Wollenberg

With the inquisitiveness of an investigative reporter and the emotional power of a novelist in his prime, Steinbeck toured the squatters' camps and Hoovervilles of California. Here he found once strong, independent farmers so reduced in dignity, sick, sullen, and defeated that they had been cast down to a kind of subhumanity. He contrasts their misery with the hope offered by government resettlement camps, where self-help communities were restoring dignity and indeed saving lives. The Harvest Gypsies gives us an eyewitness account of the horrendous Dust Bowl migration and provides the factual foundation for Steinbeck's masterpiece, The Grapes of Wrath. Included are twenty-two photographs by Dorothea Lange and others, many of which accompanied Steinbeck's original articles.