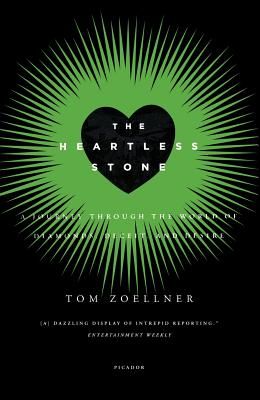 The Heartless Stone: A Journey Through the World of Diamonds, Deceit, and Desire

An adventure story in the tradition of Susan Orlean's The Orchid Thief, The Heartless Stone is a voyage into the cold heart of the world's most unyielding gem. When he proposed to his girlfriend, Tom Zoellner gave what is expected of every American man--a diamond engagement ring. But when the relationship broke apart, he was left with a used diamond that began to haunt him. His obsession carried him around the globe, from the blood diamond rings of Africa; to the sweltering polishing factories of India; to mines above the Arctic Circle; to illegal diggings in Brazil; to the London headquarters of De Beers, the secretive global colossus that has dominated the industry for more than a century and permanently carved the phrase A diamond is forever on the psyche. The Heartless Stone goes beyond investigative reporting into the regions of the human heart that make the diamond empire possible. It has been called a dazzling display of intrepid reporting ( Entertainment Weekly ) and an illuminating expose of a mineral and an industry ( The Wall Street Journal ). An American Library Association Notable Book

Books similiar to The Heartless Stone: A Journey Through the World of Diamonds, Deceit, and Desire

List of All Editions of The Heartless Stone: A Journey Through the World of Diamonds, Deceit, and Desire