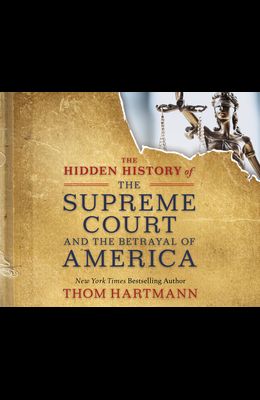 by
Thom Hartmann and Sean Pratt

What if the Supreme Court didn't have the power to strike down laws? Thom Hartmann says that according to the Constitution, it doesn't. From the founding of the republic until 1803, the Supreme Court was the final court of appeals, as it was always meant to be. So where did the concept of judicial review start? As so much of modern American history, it began with the battle between the Federalists and Anti-Federalists--and with Marbury v. Madison. Hartmann lays out the history of the Supreme Court of the United States, since Alexander Hamilton's defense to modern-day debates, with key examples of cases where the Supreme Court overstepped its constitutional powers. The ultimate remedy to the Supreme Court's abuse of power is with the people--the ultimate arbiter of the law--using the ballot box. America does not belong to the kings and queens of the Court; it belongs to the people.