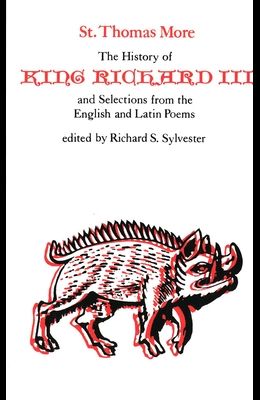 This volume is the third to appear in the modernized series of Selected Works of St. Thomas More , a series designed to make available to the general reader works which have already appeared or are about to appear in the Yale Edition of the Complete Works. The History of King Richard III is preceded by a brief introduction which offers a succinct estimate of More's achievement and indicates the important part that his work played in shaping the popular portrait of the last Yorkist king. The conventional view of Richard III in English history is essentially More's; it was his narrative that provided Shakespeare with both plot and inspiration for his Tradgedy of Richard III . In addition, More's History is a landmark in the development of sixteenth-century prose and a remarkable witness to what the new humanist history could accomplish. This volume is rounded out by a fine selection of More's English and Latin poems. More's early English poems - A Mery Gest, Pageant Verses, A Rueful Lamentation, Lewis the Lost Lover, and Davey the Dicer - are presented in their original spelling; the selections from the Latin epigrams, about fifty poems in all, are given in English translation. Full annotations and an extensive bibliography are provided for both the History and the English and Latin poems.