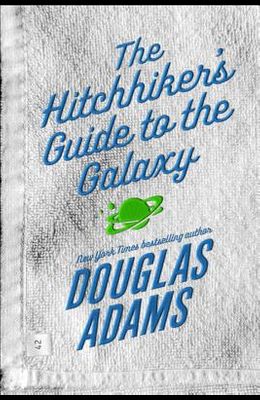 The Hitchhiker's Guide to the Galaxy

NEW YORK TIMES BESTSELLER - Extremely funny . . . inspired lunacy . . . and] over much too soon.-- The Washington Post Book World SOON TO BE A HULU SERIES - Now celebrating the pivotal 42nd anniversary of the original radio show on which the book was based. Nominated as one of America's best-loved novels by PBS's The Great American Read Seconds before Earth is demolished to make way for a galactic freeway, Arthur Dent is plucked off the planet by his friend Ford Prefect, a researcher for the revised edition of The Hitchhiker's Guide to the Galaxy who, for the last fifteen years, has been posing as an out-of-work actor. Together, this dynamic pair began a journey through space aided by a galaxyful of fellow travelers: Zaphod Beeblebrox--the two-headed, three-armed ex-hippie and totally out-to-lunch president of the galaxy; Trillian (formerly Tricia McMillan), Zaphod's girlfriend, whom Arthur tried to pick up at a cocktail party once upon a time zone; Marvin, a paranoid, brilliant, and chronically depressed robot; and Veet Voojagig, a former graduate student obsessed with the disappearance of all the ballpoint pens he's bought over the years. Where are these pens? Why are we born? Why do we die? For all the answers, stick your thumb to the stars Praise for The Hitchhiker's Guide to the Galaxy A whimsical oddyssey . . . Characters frolic through the galaxy with infectious joy. -- Publishers Weekly Irresistable -- The Boston Globe

From the front Cover Don't panic! You're not timetripping! It's the tenth anniversary of the publication of Douglas Adams's zany, best-selling novel, and to celebrate Harmony is reissuing a special edition of this cult classic! By now the story is legendary. Arthur Dent, mild-mannered, out-to-lunch earth-ling, is plucked from his planet by his friend Ford Prefect just seconds before it was demolished to make way for a hyper-space bypass. Ford, posing as an out-of-work actor, is a researcher for the revised edition of The Hitchhiker's Guide to the Galaxy. Together the gruesome twosome begin their now-famous inter-galactic journey through time, space and best-sellerdom. For Hitchhiker fanatics (you know who you are!) who've read the books, seen the television program, and listened to the radio show, as well as newcomers to Douglas Adams's unique universe -- remember -- don't panic, don't forget to bring a towel, and don't forget to celebrate The Hitchhiker's Guide to the Galaxy's tenth anniversary by wearing your bathrobe. From the Hardcover edition.