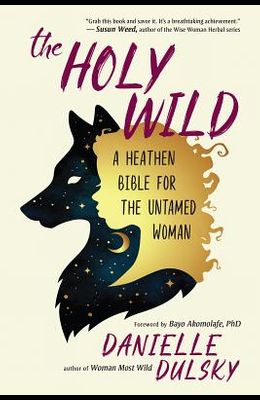 The Holy Wild: A Heathen Bible for the Untamed Woman

by
Danielle Dulsky and Bayo Akomolafe

Many women feel alienated from the spiritual paths outlined by traditional religions and by those described by popular spiritual alternatives. This ode to the Feminine Wild speaks to those women. Here are ideas and practices based on the elements (earth, fire, water, air, ether) rather than traditional patriarchy hierarchies and designed to connect individual women to their universal -- but usually denied -- powers. While goddesses and heroines from Christianity, Judaism, Hinduism, and Norse mythology are drawn upon to illuminate uniquely feminine virtues, the author deftly dismantles indoctrinated belief systems that limit women's spiritual autonomy. Why heathen? The ancient Germanic definition of the word refers to inhabiting uncultivated land, being wild and nourished by the natural world. Dulsky embraces the word as an invitation to experience the exhilaration of being fully what we are, rather than what we are told we should be.