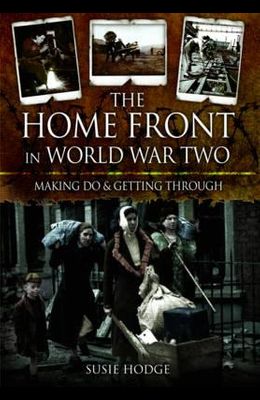 The Home Front in World War Two: Keep Calm and Carry on

This book brings an era to life with vivid stories and information from those who were there. During World War Two, 90% of the British population remained civilians. The War affected daily life more than any other war had done before. The majority of British people faced this will fortitude, courage and determination and this is their story, the telling of events and situations that forced their ingenuity and survival instincts to rise. Make do and mend came to mean so much more than reworking old clothes and this book describes the enterprise that went on and has long been forgotten. From the coasts and the countryside, this is how those at home faced and fought the war passively, particularly women whose job it was to keep the home fires burning. These ordinary people were crucial to the war effort; without their courage and inventiveness, the outcome could have been very different. Packed with interviews, photographs and other firsthand information, this book will appeal to all those who were there, but even more for those with little or no experience of World War Two, who will gain insights into the humor, strength and creativity that emerged in the face of hardship and tragedy. The book explores how people lived in Britain during times of fear, hardship and uncertainty; how they functioned and supported those away fighting and how they dealt with the enormous challenges and adversities

List of All Editions of The Home Front in World War Two: Keep Calm and Carry on